By Alan and Michael Perry

It was the night before Christmas…well about 10 days before, when a maiden in distress popped up on The Miniatures Page forum. She was a researcher from a TV company making a programme about Baden-Powell’s book Scouting for Boys which is to be shown as part of BBC4’s forthcoming Edwardian Season ( this edition is to be shown on 14th May BBC 4 at 9 o’clock ). Specifically what she needed was an accurate and detailed model of the Siege of Mafeking during the Boer War  to show how Baden-Powell’s small force and cunning weezes could hold at bay 7,700 Boers  (odds of six to one) for 217 days and how the siege gave birth to the Scout movement. What she got in response from TMP forum was a lot of jokes about Scouts and a few sensible replies one of which suggested our names as we had made a Boer War range in the past and might be able to help.

When we asked exactly what they needed and when, the full horror struck us!  They needed the Siege of Mafeking by the end of January. After picking ourselves off the floor we regretfully declined the assignment and suggested other avenues to go down. We just couldn’t comprehend doing that amount of work in six weeks along with Christmas coming up. Two days later the even more desperate researcher, Rachel, e-mailed again as she hadn’t any luck anywhere else. Michael and I talked it through with each other and decided we could do something. We could basically cut a section through the town of Mafeking, through the defensive lines and fortlets and up to the Boer siege lines. We realised we could generate a lot of the terrain with Michael’s Sudan boards but would have to add to it. So it was on………

Eight foot of trenches had to be dug to form part of the British defences. Two foot wide sections of condensed polystyrene which matched up with Michael’s Sudan terrain were used. The trench system was cut into these and textured paint (with added sand of three grades) was applied. Using an orangey-brown undercoat we dry brushed it up in successive layers ending with light sand to blend in with the original terrain. In reality the trenches were partially covered so we used corrugated plastic card painted gun metal then silver, cut them up (along with balsa wood planks) and placed across the trench system.

At the beginning we had no idea of how Mafeking looked…. but the internet is a wonderful thing. We found out that all the buildings in the photos seem to have had verandas and most were of one storey, so ACW buildings could be tweaked by simply adding corrugated roofs made from plastic card and Blue Tacked on. Luckily we had a plentiful supply of ACW building to use and in no time the tin-roofed town begun to take shape. Pictures of the town also showed poplar trees and telegraph posts and odd Union Jack which looked quite bizarre in the middle of some what barren terrain. For the Fingo homestead we used Grand Manner colonial huts which fitted the bill perfectly.

One of B-P’s cunning tricks was the use of fake barbed wire. This was created merely by hammering stakes in the ground and, having no barbed wire to hand, sending someone out to pretend to lay bard wire out along them. At the distance the Boers were at they couldn’t see that there was no wire there and stayed away. These were simply made with painted, shortened cocktail sticks stuck into the board.

The British fortlets were very simple affairs made from earth thrown up, sand bags and crates. We had mostly stuff to deal with this with the added donation of some bits and pieces by Dave Andrews, thanks Dave!

When we said yes to the project we only had around 50 Boers and 60 British from Michael’s old Foundry range. Unfortunately these fairly tired old figures only partially did the job as there were on British Line regiments involved in the actual siege. This meant creating a small ‘range’ of figures to deal with the obscure troop type making up the garrison. This was going to be a close thing to get everything done. The 680 men of the newly raised Protectorate Regiment had to be shown but their uniform wasn’t that easy to find. Michael found info on them and quickly converted some of his Sudan foot and mounted troops which did the job. Other figures had to be made from scratch such as the Town Guard who were made up from 300 armed, white, able-bodied men. There was a great photo of these posing for the camera who had in there ranks a couple of Egyptians by the look of it. Another group of defenders were the ‘Black Watch’. No, not Highlanders but 300 armed black civilians from the Native Stadt just outside Mafeking itself. This was very controversial at the time and looked down on by many British Generals.

Apart from these we had to portray the  most famous unit at the siege the Scouts or I should say Cadet Corps as they were the focus of the programme. These were used as message carriers, lookouts, hospital workers and were used to support the troops. All these troop types had to be cast and sent out straight away to be painted.

Above: The Black Watch.

Individuals such as B-P, his staff, artillery crews , some unique artillery pieces and weird stuff like jam tin bomb throwers, fake mine carriers (these were sand-filled boxes made to look like mines) and search-light bearers had to be one-off made from scratch or converted from existing figures. Some civilians from Mark Coppertone’s Foundry Old West range were also pressed into service.

We asked Jim Bowen, Dave Woodward and Chris Adcock if they’d be up for painting batches of figures as they came out the mould. Luckily they were all keen and did an amazing job in double-quick time. With out them we couldn’t have done it. In all over 200 newly made figures were painted together with the original 50 or so Boers we managed populate the 14x 6 foot board.

We’re not intending to produce any of these figures for sale, but if there is interest we could make a production mould or two.

Things that didn’t make it………

7,700 Boers didn’t make it to the table in the end, along with an armoured train (which the British used to make sorties with)…we did manage a track though! There were a few things we made which didn’t make it onto the silver screen such as the 94 pounder Creusot Long Tom with which the Boers bombarded the town. This was converted from a Foundry Siege Krupp from the Franco-Prussian War range. We also made a couple of dummy guns for a dummy fort (which during the siege attracted a lot of fire), but these weren’t used either.

D-Day -1. The Director Debbie arrived with Rachel to look at what she had to play with so to speak. They both seemed very happy and expressed that this was more than they expected, which was a relief.

D-Day.  Debbie and Rachel appeared with a certain Mr. Ian Hislop. Rachel had mentioned a couple of weeks before that he’d be coming to talk through the different methods of defence B-P used during the siege. Ian seemed transfixed by the terrain and figures when he entered the room, although he had to examine the setup in order to talk about it. After studying the terrain he got out his research material as he glibly called it! This was  2 school exercise books filled with the history of the Boer War  (including maps)  written and drawn by him when he was 11 years old! I think he’d done a bit more research since though. Luckily our terrain matched his map of Mafeking. Before he got down to rehearsals we had the chance to have a good natter with him, mostly about the First World War, another passion of his. We tried to persuade Ian to dress up in one of Michael’s Boer War uniforms, but he wasn’t having it…it wasn’t that type of programme! He did try on a couple of the cork helmets though. It must be said it was very surreal having Ian Hislop in your wargames room let alone your house. What was even weirder was the sight of Ian, Rachel and Michael jogging down the road to get Ian to his train on time.

The shoot seemed to go well. High powered spot lights lit Ian and the terrain while leaving the rest of the room in semi-darkness. For close-up shots of the terrain a boroscope lens was used which not only picked up detail but gave the whole thing an epic look. This was the same type of camera used on The Roman Way of War, a BBC Time Watch programme from 10 years ago which we worked on. The resulting footage with the lens then was excellent so we’re expecting the good results this time too.

It was a fantastic day and well worth the work involved. The Baden- Powell figure, painted by Dave Woodward is now in the collection of Ian Hislop….a collection of one!  He seems to be chuffed with it.

Above: The Protectorate Regiment, on foot.

Q - All units must have the same facing (towards of theenemy board edge) during the game, except units... read more 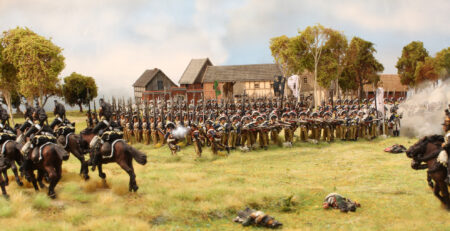