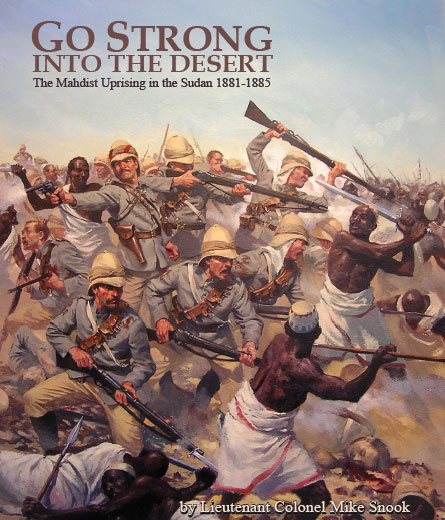 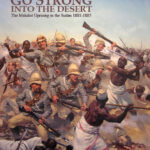 A Military History and Uniform Guide

216 pages packed full of contemporary images both colour and black and white.

with Colour Plates by Michael Perry

Following the string of disasters which befell the Egyptian military in the Sudan from 1881-1884, the Mahdist Uprising obliged a reluctant London government to deploy an array of distinguished officers and regiments. The ensuing string of battles proved to be hercule struggles encompassing some of the most fascinating episodes in nineteenth century military history. Amongst many other incidents Go Strong into the Desert recalls gallant but reckless cavalry charges, the breaking of a British square, the epic struggle to reach Khartoum in time and the heroic death of General Gordon. Throughout it all the courage displayed by both the Sudanese ansari and the British 'Tommy' was never less than astonishing. From the beginning of Muhammad Ahmad's struggle at Aba Island to the repulse of the Mahdist invasion of southern Egypt in December 1885, Colonel Mike Snook offers his readers comprehensive yet fast paced coverage of a brutal and bloody war.On 11 August 1881 two companies of Egyptian infantry landed on an island in the White Nile to arrest a remarkable imam by the name of Muhammad Ahmad ibn al-Saiyid 'Abd Allah, who called himself the Mahdi. Within the hour most of the soldiers concerned were dead – routed by a poorly armed and numerically inferior band of disciples. The subsequent dramatic rise of the Mahdist movement, culminating in the siege of the Sudanese capital, the death of General Gordon and a serious fundamentalist threat to Egypt, is told in Go Strong into the Desert, an original and authoritative military history of events in Kordofan, Khartoum and the Red Sea Littoral between 1881 and 1885.

Known for the quality and depth of his research, and extensive fieldwork on the battlefields he writes about, soldier-historian and leading subject matter expert Mike Snook has recently returned from serving in the Sudan and has once again approached the old interpretations of Victorian military history with a fresh eye, an enquiring mind and his reader's enjoyment at heart. Go Strong into the Desert focuses in close detail on the combat waged across the Sudan, and is characterized by absorbing blow by blow narratives of what actually happened during such dramatic actions as:

In addition the book's battle narratives are supported by analysis, copious illustrations, contemporary sketches, maps, detailed orders of battle, a comprehensive guide to the dress and equipment of the participants on both sides, modern photography of the virtually unchanged battlefields and more than 30 full-colour uniform plates by renowned sculptor, artist and designer Michael Perry. Designed to cater for both the history enthusiast and the hobbyist alike.